What is the Difference Between Chain Hoist and Chain Block?

What is the Difference Between Chain Hoist and Chain Block?

Chain hoist is a mechanical device used for lifting heavy loads of objects and equipment. It is made with a pulley, which is held together by a closed chain. The closed chain forms a loop, which makes it easy to be pulled by hand.

There are several large and small pulleys located throughout a chain hoist. There is one large and one small pulley are situated on the same axle, as well as a mobile pulley that holds the load in place.

For the load to be raised with the chain hoist, the closed chain has to be pulled. When it is pulled, the large pulley draws in more chain than what is released by the smaller side. From here, the lifting process begins.

Although the history of pulleys is unclear, it is known that primitive methods were employed to move heavy objects around. One of the early attempts at a pulley system was the single fixed pulley, which failed because friction prevented the wheel from being turned. Rope pulleys, which were commonly used for pulling water out of wells and are still in use today, are thought to have been invented next. 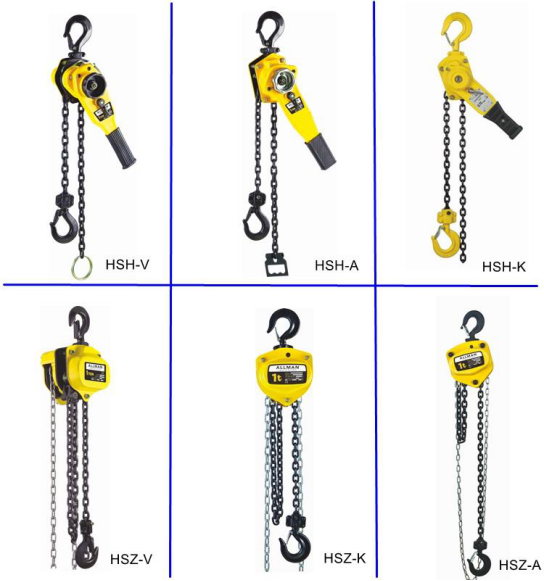 Overhead hoist types are usually referred to using terms that define a specific configuration and construction. Three areas that further define the hoist type are:

Lifting Medium: Lifting medium defines the type of component used to transmit and cause vertical motion of the hoist load hook or hoist load block. Lifting mediums include wire rope or chain..

Suspension: Suspension defines the type of mounting or method used to mount or suspend the hoist. Common suspension types include hook mounted, lug mounted and trolley mounted. Other types of suspension may be designed to meet specific application requirements.

Another similar device we use is chain block. Chain block is widely used in production of factory, miners, agriculture, electric power, building, goods lifting, vehicle loading and uploading. It can be separately used. So it becomes an important instrument in open and no power area. Except that, it can be used together with hand monorail car to be hand lifting transportation vehicles. In this way, it can lift heavy things while walking around, or transport things from place to place.

US Type High Tensile Forged d shackle G210 for lifting
Thimble DIN6899 Form B
About
Top Lifting is a manufactures of high-quality lifting and lashing products. We have an in-house team with qualified fabricators and sewing
specialists. Our testing equipment ensures that rated capacities are met with the standard.